In the warmer, tropical climate of southern Florida where odors are magnified and more persistent due to the extreme surrounding heat, there is a pressing need for a powerhouse odor control agent that can combat them.

That odor neutralizer is called Metazene, a near odorless concentrate that attacks foul vaporous odors at the molecular level, eradicating them forever — and one that is incorporated into all of our air freshener products!

But why are odors worse when it’s warm? How does Metazene actually work? And why is it so effective in the hot, humid summers and mild tropical winters of South Florida?

Continue on to learn more! Or, if you own or operate a business anywhere throughout South Florida that is suffering from any intolerable stench such as those that emanate from smoking, pets, animals, trash, garbage rooms, musty old buildings, restrooms, humid lobbies, elevator shafts and stairwells, contact us today for a trial of our odor control and air freshener services — (561) 588-2114. 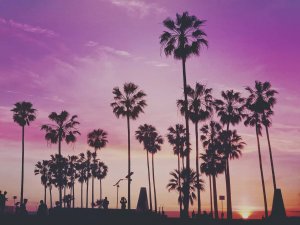 A Few Relevant Studies About Heat And Malodors

Research supports the fact that the high heat and humidity levels of tropical regions everywhere can be extremely obnoxious for businesses and their clientele. It can cause loss of patronage, induce bad reviews and affect employee productivity.

For southern Florida, the warm core tropical climate system generates more rain, humidity and mildew than is found in the Northern and central regions of the state, which translates into a greater need for air-freshening and deodorizing services because quite simply, the hotter and wetter it gets, the more bacteria thrive, creating a perfect storm so to speak for the cultivation of malodors of all types.

According to Georgetown University biologist, Colin J. Carlson, an informative study published recently in the journal, PLOS, indicated that the amount of energy available for odor-causing molecules increases in tandem with outdoor temperatures.

Extra energy is required for malodorous molecules, whether liquid or solid, to settle into the gas phase.

Excessive heat is the perfect vehicle for this transition, which results in a drastic increase in odor-causing molecule production.

This is why odors are a particularly challenging problem in warmer climates.

How Does Metazene Actually Control Odors?

Metazene is a neutralizing additive like no other on the face of the earth. While there are many products on the modern marketplace that serve to counteract malodors, they are all diverse and many do not work well at all.

This is because the majority of odor neutralizers are surface active and often rely on enzymes or antimicrobials to eliminate foul odors, which in turn stems from the belief that enzymes produce a microbial action as well.

While this is true to a certain extent, microbial agents are completely ineffectual when it comes to vaporous odors (in the air).

The mystery behind our dual action “wonder neutralizer” lies within the realms of industrial science and modern chemistry. It is a simple matter of weight and chemical reaction. 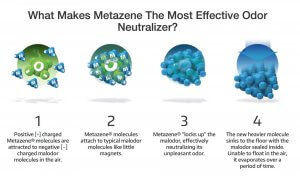 A Brief History Of Metazene And Odor Control

Bad smells have been around ever since the dawn of time.

In the ancient world, both the Egyptians and the Romans were obsessed with masking their personal body odors.

The Egyptians invented perfumed baths, and the Romans not only adopted that practice, they pushed that perfumed envelope even further by dousing their clothes, horses and even their pets with fragrance.

Conversely, the Middle Ages was a very stinky historical period. The church banned being naked even in the bath.

Malodors were an unpleasant but acceptable aspect of life until about two centuries ago, when garbage collection, the development of modern sewage systems and other waste control standards were established.

Metazene entered the world in the late 1940s, but its volatile reactivity thwarted early operations, and it took many years to perfect a product that was both stable and pure.

The initial substance contained a 40% solution of the active ingredients, but a few years later in the mid 1950s, a new form of distillation rendered the development of a full-bodied 80% concentrate.

Further research unveiled a previously unknown material, which improved Metazene as a 99% concentrate.

This was a purer form, which was both uniform in properties and colorless. This is by far the purest form to date of this dynamic and highly-effective odor neutralizer.

Consequently, Metazene was used in the very first aerosol deodorizing air freshener, produced by Gulf Oil Products in Pittsburgh, and has since become the standard of today’s aerosol odor control products.

Later, it was also adapted for use within certain industrial and municipal industries, including portable toilets, waste water treatments, landfill treatments and other areas.

Thanks to Metazene, air care has come a long way in ensuring clean, fresh-smelling and odor-free commercial environments in warmer, tropical climates where odors are bolstered by the ambient heat and can be all consuming and more tenacious.

Formerly known as Ellison Service Corporation, Essential Air Care has been in continuous operation since 1973, and we have since become South Florida’s leading commercial air freshener and odor control company.

Our provision of professional services for all kinds of commercial enterprises spans all across the Southeastern Florida region.

Some of these industries include but are not limited to: airports; fitness centers; recreation facilities; government buildings; restaurants; retail stores; hospitals; nursing homes; office buildings; condominiums; reception areas and theaters.

We offer business managers and owners services that are available to commercial enterprises situated in south Florida, extending from Melbourne to Homestead and westward into the Glades.

Although many managers and owners of commercial and industrial facilities hire in-house custodians to tackle the ongoing problem of restroom cleaning, the average company maintenance staff is not always aware of the many advancements in research and the best products available to specifically address the elimination of the most stubborn vaporous malodors.

In fact, they often need outside help, and that’s where Essential Air Care and Metazene enter the not so-sweet-smelling picture!

Call our teams today and let the powers of Metazene transform your Floridian business into a pleasant and odor free work place!

We Provide Air Care Services For Any Type Of Commercial Environment

Although ambient scent marketing in hotels has been around for almost two decades, it has only been in the last few years or so that many hoteliers have jumped upon the olfactory bandwagon. Harnessing the sheer power of scent adds a certain visceral aspect to …

Food retailers have long been aware of the power of ambient gourmand fragrances to influence sales and consumer loyalty. In southern Florida, the most prominent company associated with this special marketing skill is Essential Air Care. Visual cues, such as; familiar pictures, shapes …

Read More
We use cookies on our website to give you the most relevant experience by remembering your preferences and repeat visits. By clicking “Accept All”, you consent to the use of ALL the cookies. However, you may visit "Cookie Settings" to provide a controlled consent.
Cookie SettingsAccept All
Manage consent

This website uses cookies to improve your experience while you navigate through the website. Out of these, the cookies that are categorized as necessary are stored on your browser as they are essential for the working of basic functionalities of the website. We also use third-party cookies that help us analyze and understand how you use this website. These cookies will be stored in your browser only with your consent. You also have the option to opt-out of these cookies. But opting out of some of these cookies may affect your browsing experience.
Necessary Always Enabled
Necessary cookies are absolutely essential for the website to function properly. These cookies ensure basic functionalities and security features of the website, anonymously.
Functional
Functional cookies help to perform certain functionalities like sharing the content of the website on social media platforms, collect feedbacks, and other third-party features.
Performance
Performance cookies are used to understand and analyze the key performance indexes of the website which helps in delivering a better user experience for the visitors.
Analytics
Analytical cookies are used to understand how visitors interact with the website. These cookies help provide information on metrics the number of visitors, bounce rate, traffic source, etc.
Advertisement
Advertisement cookies are used to provide visitors with relevant ads and marketing campaigns. These cookies track visitors across websites and collect information to provide customized ads.
Others
Other uncategorized cookies are those that are being analyzed and have not been classified into a category as yet.
SAVE & ACCEPT